Yesterday was another busy day, in part because we’ve been getting ready to host a small party for our youngest son’s birthday. No biggie, just a few family and friends, but it means there’s a bit of extra work to be done. For me, that mostly turned out to be work around the house and yard, plus a few extra errands, etc. Which was all fine, but it meant that when it was time to get busy cooking dinner, both my wife and I were tired enough that we didn’t have to work too hard to talk each other into taking the family out for dinner instead.

This didn’t need to be a problem. We were going to make Mexican for dinner anyway. I usually make a nice, reasonably healthy meal with marinated chicken breast, rice, beans, salsa, a little bit of cheese, sour cream, and guacamole. Sometimes I make fresh pico de gallo, and I may have a few corn chips to go with it all. If we go out, I get essentially the same thing at our “local” burrito joint. In or out, it’s roughly the same meal. Unless I decide to have a margarita with my meal. And unless nobody wants to share a serving of corn chips with me, so I order and eat a whole one by myself. If that happens, then what starts out as a reasonably healthy meal gets real unhealthy, real fast. 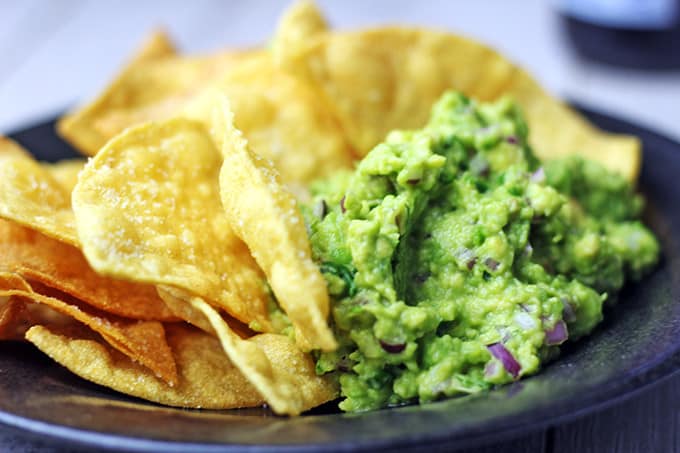 It was delicious, and I enjoyed every mouthful. And I’d had a light lunch so when I look at my daily totals, it’s really not all that bad. Over the course of a week, I don’t think it’ll have much of a negative impact. But I’m disappointed with myself for giving into the temptation, and more importantly for not planning it in advance, or even checking to see how many calories/points it would add up to be before I put it in my mouth. I’m not beating myself up over it, but I’m using it as another reminder of the importance of making a plan and sticking to it, and of making informed decisions about what I eat.

I’d already looked up the nutritional info for those corn chips and it was stored in my app. If I’d added it to my food log before we left, on the way there, or even while we were sitting at the table waiting for my son to decide what he wanted, I’m pretty sure I would’ve seen the numbers and made a different decision. But I didn’t. And I suspect that I didn’t do it because somewhere in my unconscious mind, I knew what the numbers were, and didn’t want my conscious mind to screw up the party.

I’m reading a book right now called Incognito: The Secret Lives of the Brain by a neurologist, David Eagleman (yes, this is the kind of thing I’m referring to when I say I try to make time to read for pleasure). So far, it’s been all about how little our conscious thoughts control most of our behaviours. We’re not nearly as in control of ourselves as we like to imagine. I keep thinking about how that might apply to things like eating healthy and losing weight, and it goes a long way to help explain a lot of things that otherwise don’t make a lot of sense.

It’s often easy to look at other peoples’ behaviour and wonder why in the hell they do what they do. But how often do we step back and ask the same questions about our own behaviour? Like, why in the world would I eat an extra 1000 calories worth of corn chips and guacamole with my otherwise sensible and healthy meal last night? With all my goal-setting, and all my explanations about why I want to lose weight and get healthier so that I hopefully won’t drop dead in the next 5 years and will be able to have more fun with my family and travel and do the things that (at least to me) make like worth living, eating a bunch of fried tortilla chips seemed like a fine idea. Why?

Because fried tortilla chips are awesome, and also because my brain, my gut, and various other parts of my body are happy for me to stay fat. They’re actively working to make sure that I stay fat, and possibly get fatter. Which is one of the many reasons why losing a lot of weight and keeping it off is so hard. And why so many people fail, no matter how hard they try. These are the kinds of things I keep thinking about, and on the one hand, it seems depressing and demotivating and generally unhelpful. But on the other hand, this is reality. This is what I’m up against. What we’re all up against. Pretending that it isn’t real is much less helpful than recognising it and trying to find strategies to deal with it.

I'm a fat, middle-aged white guy who's trying to lose weight. A LOT of weight. My goal is to lose 200 pounds. I was born in 1968 and I grew up in East and Southeast Texas After graduating high school in 1987, I went to the University of Houston and then Lamar University. In 1994 I shoved my life into a suitcase and moved to Australia. I was married in 1998, and my wife andI have 3 children (all boys) aged 19, 16, and 10. We lived in Canberra (the national capital) from 2001 until 2016, and now we're in Brisbane, Queensland. I'm a librarian by profession but currently living as a stay-at-home dad and a Gentleman of Leisure (I sometimes describe myself as temporarily retired). I've been overweight since puberty, and gradually went from 200lbs in 1988 to 250lbs by 1998, and then to 300 a decade later, and over 400 lbs by 2011, when I first joined Weight Watchers. I lost about 100 lbs in 6 months, then quit, and then my weight bounced around between 330 and 375 for several years after that. I joined Weight Watchers again in May 2017, and discovered that I was back up over 400. So now I'm trying as hard as I can to lose over 200 pounds and get back under 200, and preferably to 186 lbs, my weight when I graduated high school. View all posts by Wil

This site uses Akismet to reduce spam. Learn how your comment data is processed.